Elon Musk: The man you don’t bet against 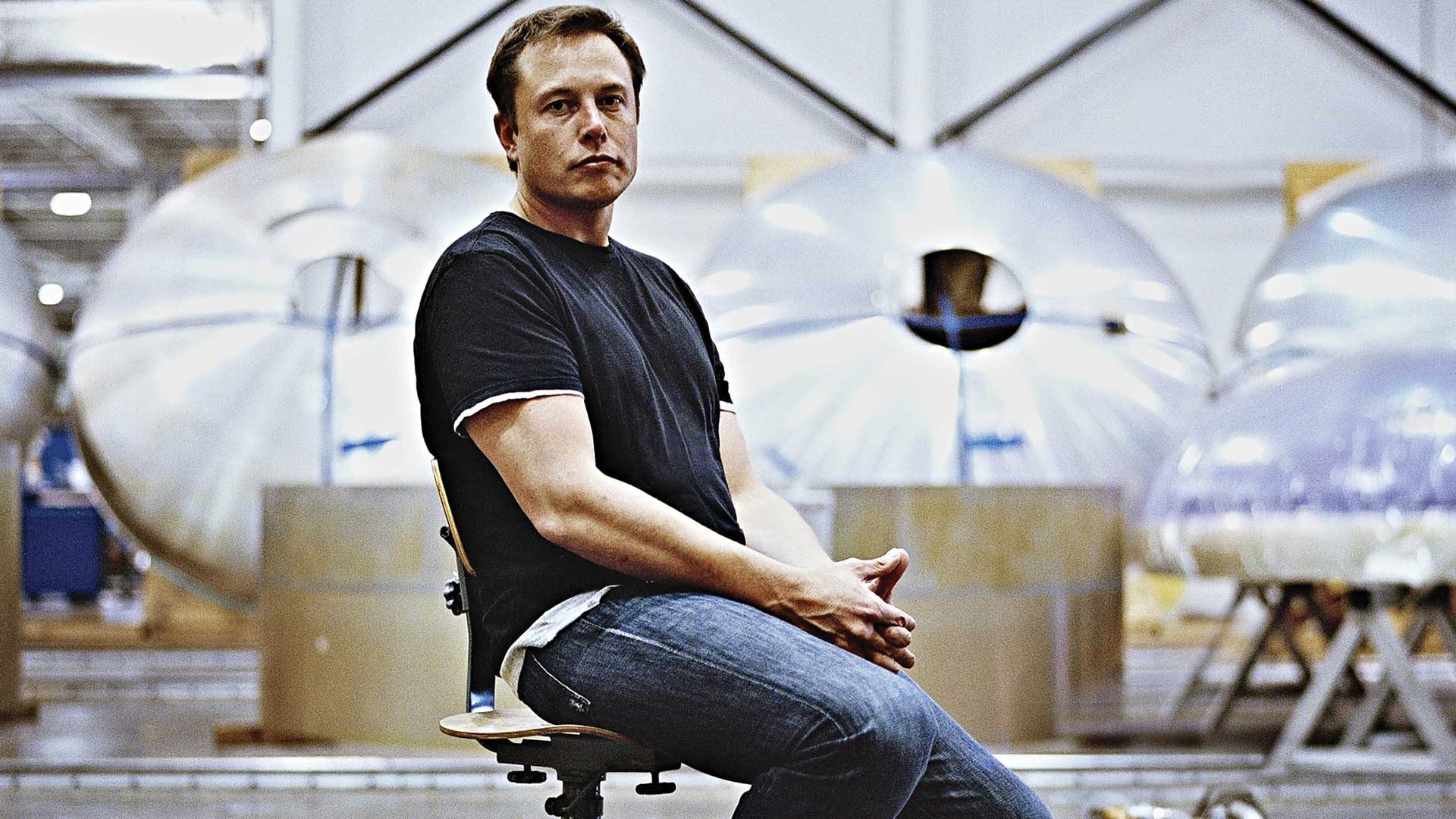 An entrepreneurial visionary, and dubbed ‘tech titan’ of the world, Elon Musk has gone where most would not dare to tread. His innovative, revolutionary and often-unorthodox ideas – the steps of one man – resulted in some giant leaps for mankind.

Born to a Canadian mother and South African father, growing up in the outskirts of Durban, Musk – a reserved and freakishly intelligent boy – threw himself wholeheartedly into the world of books, reading for up to 10 hours a day.

At the age of 10 he taught himself computer programming, completing a six-month BASIC course in just three days. When he was only 12 years old, he wrote code for a space game – Blastar – and sold the software to a computing magazine for $500. That was his first sale ever made and unbeknownst to many, including Musk himself, marked the start of a lifelong entrepreneurial journey.

In 1989, at 17, Musk moved to Canada to avoid compulsory military service under the apartheid government. He stayed with relatives and did odd jobs to survive, one of which was shoveling dirt in a boiler room for $18 an hour. He attended Queen’s University in Kingston, Ontario, but left in the early nineties to study business and physics on a scholarship at the University of Pennsylvania’s Wharton School of Business. He completed his undergraduate degree in economics and obtained a second bachelor degree in physics.

Thereafter Musk enrolled for a high-energy physics graduate programme at Standford University, but dropped out only two days later to focus on his entrepreneurial pursuits.

The making of a millionaire

His interests lay with the Internet, space and renewable energy, and years later he would break ground and make millions on these very terrains.

With clarity of vision, sheer determination and $28 000, Musk (then 24) and his brother Kimbal took the leap and founded their first company – Zip2. The company primarily provided and licensed online city guide software (Musk wrote the code himself) to newspapers.

The software landed the siblings lucrative contracts with The New York Times and the Chicago Tribune, and in 1999 Compaq – a company that developed, sold and supported computers – bought Zip2 for $307-million in cash and $34-million in stock options. Musk walked away with 7% ($22-million). He had had his first taste of fortune at the age of 28.

With half of that early fortune, Musk co-founded the online payment system then known as X.com. Now known as Paypal, the company radically changed the way the world did business. eBay acquired PayPal for a staggering $1.5-billion and Musk accrued approximately $180-million.

Rockets in his pocket

Despite having enough money to retire, Musk continued to seek ways in which he could realise his dreams – space travel being one of them – and worked tirelessly in their pursuit.

“I could go and buy one of the islands in the Bahamas and turn it into my personal fiefdom, but I am much more interested in trying to buy and create a new company.”

And he did just that.

In an attempt to purchase a rocket to send to Mars, Musk met with Russian rocket manufacturers, only to conclude that it would make more sense for him to start his own company, building affordable, reusable rockets. With $100-million of his fortune, he launched SpaceX (Space Exploration Technologies) in May 2002, with the goal of making space travel commercially accessible, and to advance the state of rocket technology by manufacturing space launch vehicles.

In March 2006, the company underwent launch failure when the first rocket exploded. However, in July of the same year, SpaceX won NASA contracts to devise cargo delivery to the International Space Station (ISS). In March 2007, his second launch failed, after which the third – in August 2008 – also failed, destroying four satellites, including one belonging to NASA. Tenacious, undeterred, and fourth time lucky, Musk successfully launched his fourth rocket a month later.

In December 2008, SpaceX was awarded a $1.6-billion NASA contract for 12 flights of its Falcon 9 rocket and Dragon spacecraft to the ISS. An astronomical success, Musk made history, launching falcons and dragons into space – the first time a private company had sent a spacecraft to the International Space Station.

Besides vested interests in technology and space travel, Musk is at the forefront of revolutionising the automobile industry. He became not only the chief executive but also the very face of Tesla – the company dedicated to drastically reduce CO2 emissions by manufacturing autonomous, electric vehicles.

In 2002 Musk had already begun exploring the option and feasibility of manufacturing electric cars. He met with JB Straubel, an electric car enthusiast, in 2003. A year later, in 2004, Musk met with the founders of Tesla, and was impressed with their pitch; so much so that he invested a couple of million dollars into the start-up.

“I thought about what are the problems that are most likely to affect the future of the world or the future of humanity? I think it’s extremely important that we have sustainable transport and sustainable energy production. That sort of overall sustainable energy problem is the biggest problem that we have to solve this century, independent of environmental concerns. In fact, even if producing CO2 was good for the environment, given that we’re going to run out of hydrocarbons, we need to find some sustainable means of operating.”

Elon Musk has defeated the odds time and time again, making prescient strides across various industries, often causing mere ideas to skyrocket into full-fledged functioning companies. He has reached significant milestones: manufacturing self-driving cars, sending rockets to space, and building an astronomical personal fortune worth $15-billion – and all before the age of 50.

In the words of Tesla’s co-founder, Ian Wright, “There is always tension between the visionary and the day-to-day, but that’s what causes things to happen as you figure out how the world is going to be. It’s really hard to imagine how Elon does it all. He’s human like everyone else. It hasn’t been smart to bet against him.”

Pushing boundaries yet again, Musk started a neuroscience medical research company called Neuralink, which will focus on integrating the human brain with computers. This venture will include the manufacturing of an implant into the skull that will cause the brain to function more optimally, by designing networks to link human brains with embedded electrodes capable of transferring thoughts to a computer. It will also serve as a defense against Artificial Intelligence (AI) machines. The implanted neurochip will also aid in reversing the effects of neurodegenerative diseases, as well as conditions such as epilepsy and major depression and, eventually, making our brains faster and smarter.

His life in a nutshell 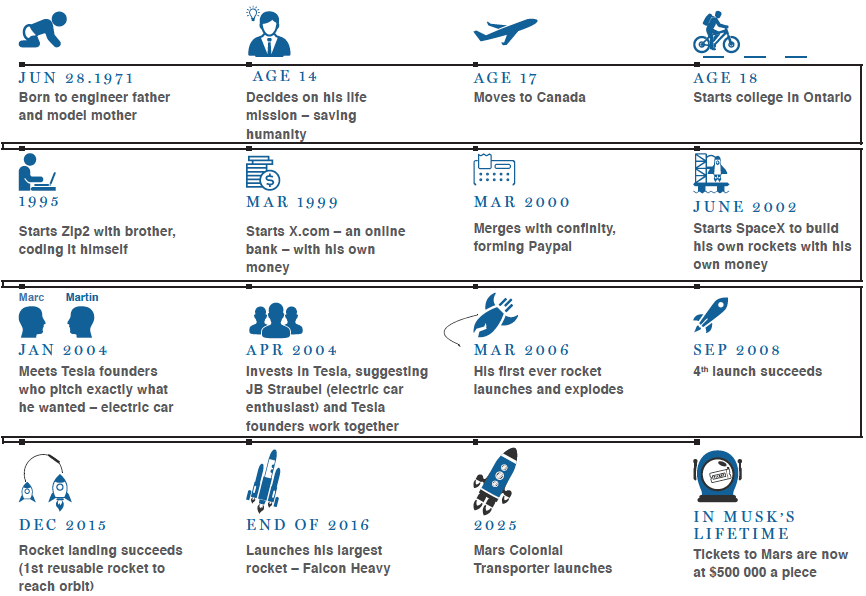