How to stay healthy while running a business 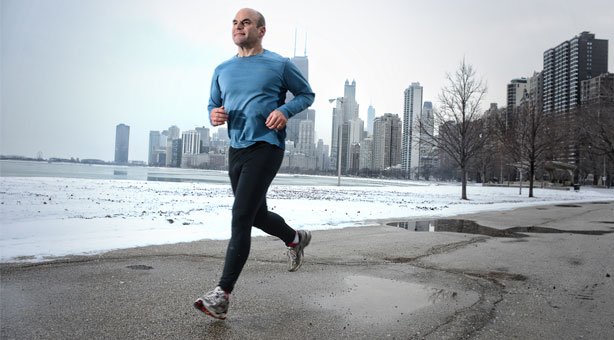 Neglecting your own well-being is just as bad as taking your eye off the numbers.

Entrepreneurs should always have an eye on their company’s financial health, but it’s also important to stay in shape yourself. When you’ve got investors breathing down your neck and targets to hit, that’s not always straightforward though.

“The biggest problem for entrepreneurs is they get excited about their business and they put themselves second,” says John Neal, a performance coach and tutor at Ashridge Business School who has worked with Vodafone, the Bank of England and the Welsh Rugby Union. “So they forget about exercise, diet, sleep – they’re so excited by the entrepreneurial idea that that’s all they do. Before they know it they’re tired, they’re fatigued, they’re overweight and they’ve got a cold or the flu.”

Of course that’s bad for you personally, but staying healthy isn’t just about your own wellbeing. “The healthier people are, the more focused they are, the better they are at performing at the higher level which they need in order to successfully run their own business,” says Ross Cowan, who runs his own personal training business, M.E.T.A Studio. Focusing too much on work and not enough on yourself is bad for your business, your employees and for your family.

There’s plenty of help out there for busy people looking to stay fit, from the clinically medical to the deeply spiritual. But you don’t need to call a celebrity nutritionist or a witch doctor just yet – there’s some simple steps you can take to keep your mind and body fighting fit.

YOU ARE WHAT YOU EAT

If you’ve got a lot on, it’s easy to shun healthy options for a Mars bar. “When you’re entrepreneurial you’re normally adrenalised, you’re excited,” says Neal. “What that does is cause you to crave short-term hits of sugar. So typically you’ll grab for the biscuits, cake, anything that’s quick, easy, processed and you can consume quickly so you can carry on.”

Instead, keep your energy levels up and cravings at bay by eating a high-protein breakfast, grazing on nuts, seeds and fruits and drinking plenty of water. Soup can be a good lunch option, says Neal, because it contains both water and food.

Whatever you do, don’t try to get by on coffee alone. “Try to get some real food into your system instead of running on adrenaline, which a lot of business people do,” says Jacqueline Harvey, who owns and runs lifestyle clinic Crystal Clear Health.

“It’s these caffeine uppers and downers and that can be, in the long term, very detrimental to your endocrine system, your adrenal system can crash. A lot of people in business can burn out because they keep pushing and their body gives way.”

Some people just can’t get enough exercise, but on a cold rainy morning it can be tempting to hit the snooze button rather than put on your running shoes. Finding ways to fit it into your day is important, though.

Entrepreneurs are “driven people who need to have an entrepreneurial type challenge, which requires them to be fit,” says Neal. “They won’t prioritise fitness or health, but what they will do is try to achieve challenges, because they’re driven people.”

Needing to be in shape for a forthcoming task can be a great source of motivation. Neal suggests cycling around Britain or climbing Kilimanjaro, for example and Cowan recommends Tough Mudder, a gruelling obstacle course that includes swimming through ditches of icy water and crawling through mud under barbed wire (if that floats your boat).

As for the type of work-out you should be doing, “Match your exercise with the intensity of your work,” suggests mind and body coach Alisa Burke. “If you are in a very intense work period then I would do something like interval training, or even just going outside and running fast between lampposts and walking for a bit. It trains your body to cope with an intense period of putting your body under a lot of stress and then learning to recover from it.”

Take some time to let your body and mind recharge. “Taking a cyclical approach to how you work is proven really beneficial,” says Burke. “It’s fine to have really intense periods, but then to schedule in, perhaps after a big deadline, a week where you can take the pace off – whether that’s lightening your work schedule or shifting the way you exercise.”

Resting can help get the creative juices flowing again, too. “If you go and speak to entrepreneurs who have made it long-term, like Dyson or Branson, what you will find is, yes they were hard driving but they would also take time out,” says Neal. “They recognise that good ideas come when you take time out. You’ve got to have the patience, you’ve got to be willing to slow down to speed up.”

Nobody enjoys going to the doctor’s and it’s especially easy to put it off if you have a busy lifestyle, but ignoring signs of illness can have severe consequences. “The biggest issue for executives, a bit like the biggest issue for men, is getting them to actually come along to see anybody in the medical profession for anything,” says Dr Nick Summerton, a GP who is medical director of health screening firm Bluecrest.

“We can list lots of health problems that executives might have, but they won’t know they have high blood pressure or high cholesterol unless they have it measured.”

Emotional well-being is important too. Some entrepreneurs “tend to take on these bad habits of fear and worry and that can have really damaging effects on your energy and your health,” says Burke. “It’s a real cognitive drain as well, both mentally and physically. Even really successful business owners, there’s always a fear of ‘oh I’m not good enough’. I would definitely say pay attention and do what you can to shift those habits before they take a grip and take their toll.”

Perhaps the most important thing to remember is that there’s no point in working every hour if it means neglecting your health. “Running a business is one of the most fun and dynamic things anyone can do – if you look after yourself,” says Harvey. “If you don’t, it can be the most arduous.”