The world at his feet: An interview with Seabelo Senate 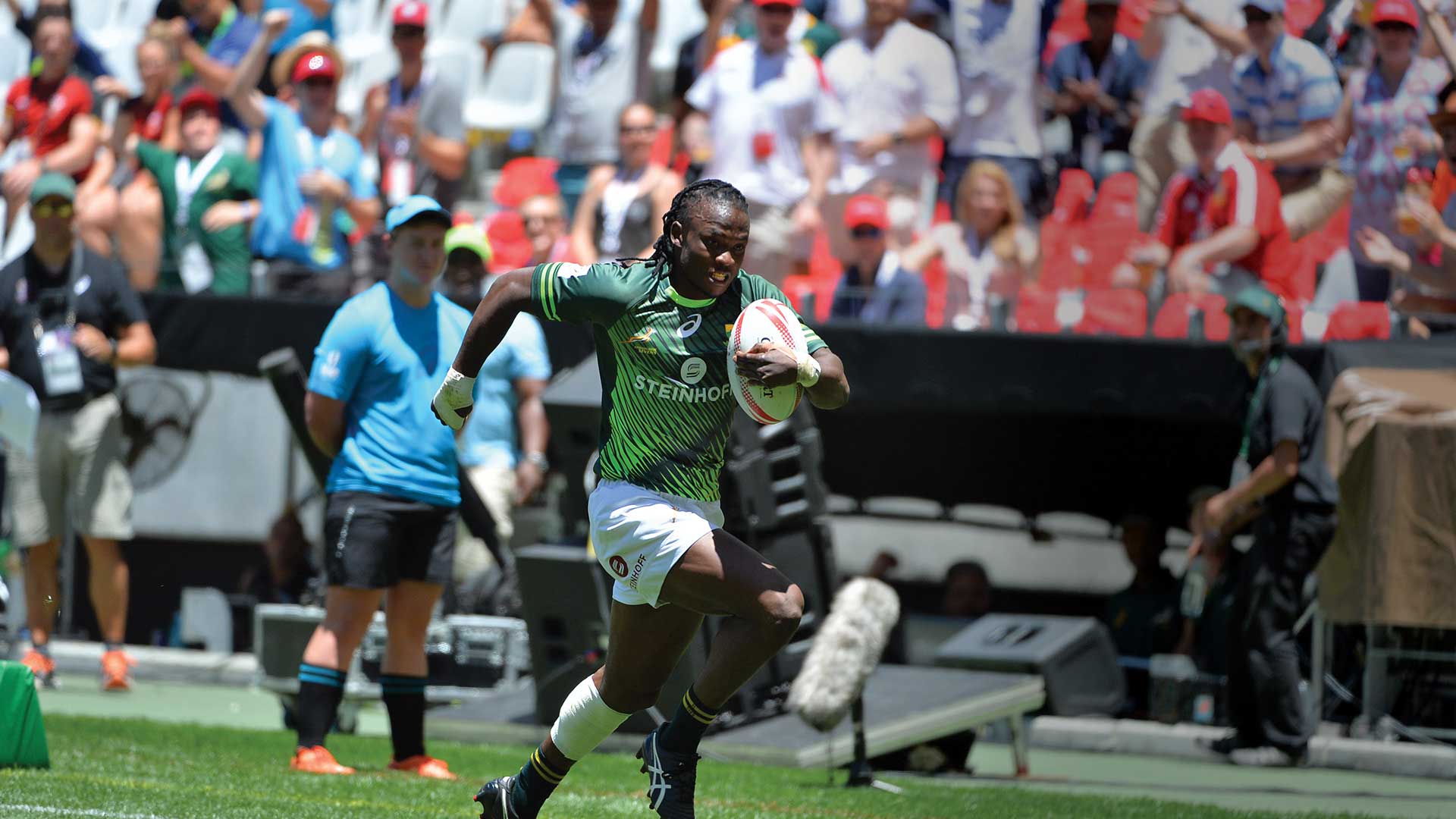 Blitzbok flyer, Seabelo Senatla, has taken the rugby world by storm. At only 24 years of age, he has won the World Seven’s Player of the Year and become South Africa’s all-time leading try scorer in the seven-man format. Now, South Africa’s latest rugby sensation has his sights set on the 15-man format.

The 2016 rugby season was probably the worst in Springbok history, which included a string of disappointing losses on their end-of-year tour to Europe. But in stark contrast to the Springboks, the Blitzboks – South Africa’s Sevens squad – gave the rugbywatching public a reason to switch on their televisions and flip to the sports channel.

Coming off the back of a successful 2014/15 season, the Blitzbokke have won three of the four tournaments on the 2017 season’s circuit so far. Their only failure was falling to England in the Cape Town final in December 2016.

While it was largely a team effort, a lot of the squad’s success can be attributed to arguably the best player currently in the game, Seabelo Senatla. The speedster, aka the ‘Warrior from Welkom’ (coined by a co-worker) was named World Rugby Seven’s Player of the Year, and frankly, it came as no surprise to rugby fans all over the world.

He is exciting to watch and is the most feared player on the circuit. With his explosive pace and dazzling twinkle toes, Seabelo has the ability to cut through defensive lines with surgical precision and run rings around his opposition, more often than not, leaving them in his dust.

Being a lethal finisher, Seabelo is a regular crowd favourite no matter what city the circuit is touring in. He has scored an
incredible 66 tries in 10 events during the 2015/16 series – the second highest in the event’s double-digit history – a memorable achievement for the 24-year old.

He also recently became South Africa’s top Sevens try scorer when he crossed the white line for the 179th time in a Blitzbok jersey and surpassed the previous record held by Fabian Juries.

During the 2016 Rio Olympics quarterfinal match against Australia, Seabelo injured his wrist and was withdrawn from the squad, which, according to Olympic committee regulations, meant that he would not be one of the 12 players who stood on the podium to receive a medal.

However, there was a touching moment when his replacement, François Hougaard handed Seabelo his bronze medal after the Blitzboks managed to beat Japan and secure third place at the Olympics.

Seabelo will shift his focus this year to the 15-man format and will do duty with the Stormers during their 2017 Super Rugby campaign. Although he’ll be sorely missed by the Blitzboks, it’ll be interesting to see what impact he’ll make.

Although Seabelo is Sevens Rugby’s new rising star, he remains a humble individual. Here’s what he had to say about his recent success.

The Blitzbok squad is currently in good form at the moment. What do you attribute this to?

SS: I think the environment in which the team operates is very conducive to good results. We have a settled base at the Stellenbosch Academy of Sport and have everything we need right there. It also allows the guys to spend a lot of time together and that creates a strong bond between players. We are a band of brothers. With this as our backing, it is easy to transfer that onto the training pitch where we push each other and then onto the playing field, where we play for each other, the team and the country. Also, there are rugby players in that group with extraordinary talent and they have gained a lot of experience, with a number of guys who have played 50 tournaments and more. But credit also to our management. We have a great coach in Neil Powell and the rest of the management team is also top class. It makes our job as players so much easier, as we only need to trust our systems and it will ultimately lead to our success.

Do you have any advice for aspiring athletes?

What do you consider your greatest moment in sport?

SS: I am still young, so hopefully there will be many more great moments in my career. Obviously, doing well in the Olympics is one moment that really stands out for me as it was the first time we were part of it. Also, the incredible act of kindness from François Hougaard to give me his medal highlighted that experience, as it just confirmed the values of the event. To be honest though, every time we take to the field as a team is a massive highlight. And every tournament we win. When I moved past the try-scoring record of Fabian Juries, I also felt very proud. Every try is a team effort and that was proof that we managed to get it right as a team.

Where do you see yourself in five years time?

SS: Hopefully I will still be playing rugby. On a personal level, I hope to stay a happy person and remain true to myself.

If you weren’t an athlete, what would you be?

SS: I did study accounting in my first year at Central University of Technology in Bloemfontein before rugby took me on another career path. I passed my first year, so maybe I’ll look for work as an accountant somewhere if things don’t work out…