Two-sides of the same coin: The public and private sector need to work together 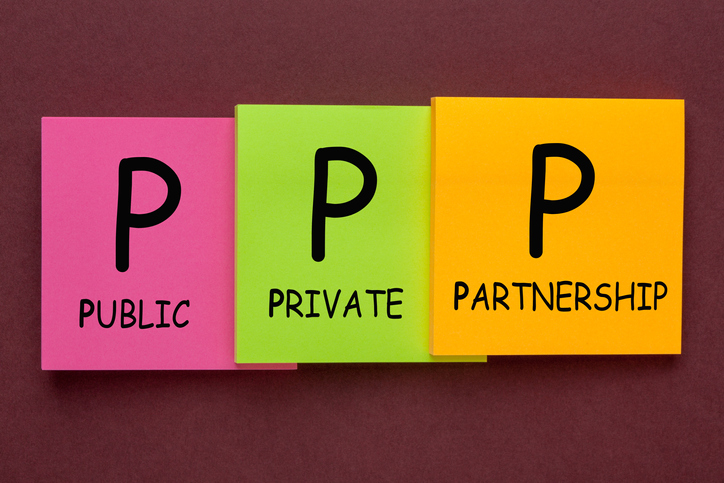 One of the goals of South Africa’s National Development Plan is that infrastructure investment as a percentage of GDP needs to grow from 21 per cent in 2015 to 30 per cent by 2030.  The state cannot achieve this growth on its own –  and needs partnerships with the private sector to achieve this goal.

Public private partnerships (PPPs) are defined by National Treasury as “a contract between a public-sector institution/municipality and a private party, in which a private party assumes substantial financial, technical and operational risk in the design, financing, building operation of the project” – and they are regulated by the Treasury.

The difference between PPPs and traditional government infrastructure projects

A PPP is defined as a contract between a public-sector institution and a private party, where the private party performs a function that is usually provided by the public-sector and/or uses state property in terms of the PPP agreement. Most of the project risk (technical, financial and operational) is transferred to the private party. The public sector pays for a full set of services, including new infrastructure, maintenance and facilities management, through monthly or annual payments. In a traditional government project, the public sector pays for the capital and operating costs, and carries the risks of cost overruns and late delivery – National Treasury

To develop a policy/regulatory framework, provide advice and technical assistance, a PPP unit was established in 2000 as a division of the Budget Office Division in National Treasury and thirteen years later, in 2013, it became part of the Government Technical Advisory Centre (GTAC).  The Head of GTAC reports directly to the Minister of Finance, with National Treasury retaining all approval and regulatory functions.

In line with the transformation agenda of the South African government, black economic empowerment has an important role to play in public private partnerships. There are BEE scorecards for each project, with targets for:

When bidding for partnership tenders with the public sector, private companies are evaluated on their commitment to the Vision 2030 goals as set out in the National Development Plan.

The R25.4-billion Gautrain Rapid Rail Link Project is one of the biggest public private partnership transport infrastructure projects in Africa and the first ever rapid rail transport system built in South Africa.

Hundreds of work hours are wasted annually due to traffic congestion on Gauteng’s major arterial road transport system. One accident and motorists sit in gridlocks, unable to move. The answer to this was to provide an alternative by moving away from road-based motorised transport to rail-based transport for passengers and freight.

After rigorous planning and a number of feasibility studies conducted in the late 1990s the rapid rail link was put out to tender and the consortium which won the bid was Bombela (Bombardier, Bouygues Travaux Publics, Murray & Roberts and Strategic Partners Group), which will also maintain and operate it for 20 years.

The rapid rail link was launched in 2011 with its major purposes being the stimulation of economic development, reducing traffic congestion and providing a reliable, safe and efficient service to commuters between OR Tambo airport and Pretoria. It is managed as part of the Gauteng Department of Finance and Economic Affairs Public Private Partnership Unit.

How many people have used the Gautrain rapid rail link over the last few years?

Sustainability and the Gautrain

Over the last year the country’s reliance on the ailing, coal-based Eskom generated power nearly brought the economy to a standstill with rolling load shedding taking place day and night. Many people downloaded the app Eskom se Push, not only for the alerts it provided but because the name of the app represented the general public outrage at being held hostage to a non-renewable energy source provided by ailing infrastructure.

Twelve years ago, in 2009, we started investigating how to increase and sustain private investment in renewable energy and in 2010, after the necessary legislation had been passed, the Department of Energy launched the Renewable Energy Independent Power Producer Programme (REIPPP) to enhance South Africa’s power- generation capacity. This programme encourages independent power producers (IPPs) to generate power  using renewable techniques which the Government then buys for Eskom.

The REIPPP was also structured to contribute to broader national development objectives:

“South Africa’s renewable energy procurement policy is unique in its emphasis on stimulating socio-economic benefits at the local level for communities in the vicinity of renewable energy (RE) projects. In addition to potential indirect benefits for communities, deriving from procurement and construction, government policy places specific requirements on independent power producers (IPPs) to foster community ownership in the form of shareholding in RE projects, local employment, as well as annual monetary contributions to stimulate local development” – Cobenefits Study 2019.

What is an independent power producer?

An IPP is a company established by a range of shareholders to bid for the construction and operation of an independent power plant. The shareholders typically could include:

An example of IPPs

During construction of the three projects, an average of 2 000 people were employed worked on the sites from local communities and 1.5% of project revenues were invested in socioeconomic and enterprise development programmes and skills development to ensure the sustainability of the renewable energy industry.

How successful has the Programme been to date?

The Department of Mineral Resources and Energy’s Integrated Resource Plan (IRP) 2019 reported that a total 6 422 MW under the Renewable Energy Independent Power Producers Programme had been procured, with 3 876 MW operational and made available to the grid.

In February 2020, Finance Minister Tito Mboweni announced that spending by the Department of Agriculture, Land Reform and Rural Development (agriculture department) was expected to increase at an average annual rate of 2,4%, from R17.2-billion in 2019/2020 to R18.5-billion in 2022/2023.

Inclusive of all additional grant and government programme funding through various departments, the consolidated spending on agriculture and rural development functions was expected to amount to just over R28-billion, which represents 1,43% of total government expenditure for 2020/2021.

Hon. Mboweni also announced that over the medium term R495.1-million has been allocated to the agriculture department to improve compliance with biosecurity and support exports.

In the same month, a non-profit organisation, the Agriculture Development Agency (Agda) was launched to provide funding and skills development training to emerging farmers in South Africa. The agency is part of the Public Private Growth Initiative established in 2018 under the leadership of Dr Johan van Zyl, CEO and President of Toyota in Europe, Roelf Meyer and Nick Binedell, Founder and former Dean of GIBBS.

The Public-Private Growth Initiative (PPGI), a collaboration between government and business, which brings role players across more than 20 sectors together, selected a number of projects for priority implementation in 2019. One of the main drivers of this agricultural project is the In Transformation Initiative:

“The ultimate aim is to use our land profitably. That is why we have had extensive discussions so that by a process of consultation we could come up with this membership organisation that is a private sector initiative, but where we consult with government.” – Roelf Meyer, Director: In Transformation Initiative

Formed in 2013, the In Transformation Initiative team has been called upon by governments, international organisations, and individuals throughout the world to support and advise the creation of peaceful and lasting solutions. Over the years, they have assisted in Northern Ireland, Sri Lanka, Colombia, Madagascar, Zimbabwe, Kenya, Cyprus, Sudan, South Sudan, Yemen, Iraq, Spain (in the Basque region), Bahrain, and India (on the Naga question).

Boosting agricultural production is a key focus of our Vision 2030, National Development Plan and Agda is an example of a PPP which improves economic growth and boosts the country’s GDP.